MIAMI VALLEY, Ohio (WDTN) — 8:00 PM UPDATE: The Severe Thunderstorm Warning for Butler and Warren County has expired and was replaced by a Flood Advisory until 10 p.m.

7:15 PM UPDATE: The National Weather Service has issued a Severe Thunderstorm Warning for Butler and Warren County until 8 p.m.

The rest of the severe weather appears to be continuing south of the Miami Valley into the Cincinnati metro area, bringing strong winds and chances of hail.

6:00 PM UPDATE: The Severe Thunderstorm Warning for Champaign and Logan County has been canceled — in it’s place is a moderate Flood Advisory.

4:40 PM UPDATE: Clark and Greene County have been issued a Severe Thunderstorm Warning until 5:15 p.m. by the National Weather Service.

Storm Team 2 Chief Meteorologist said he’s tracking possible wind gusts of up to 60 mph and hail moving in with the storms.

4:15 PM UPDATE: The sun is beating down on the Miami Valley, bringing temperatures well into the 90s and even into the 100s closer to Central Ohio. 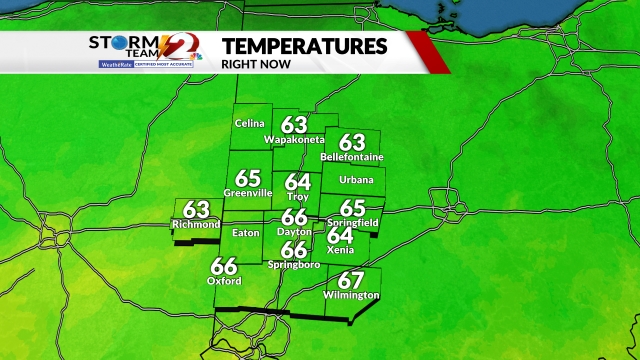 Storm Team 2 Chief Meteorologist Brian Davis is tracking thunderstorms moving through Central Ohio as well, with a few isolated showers south of Dayton. He said there is a chance of spotty showers or thunderstorms Tuesday night into Wednesday.

The risk of severe weather is very low but the parts of the region could see strong wind gusts.

Close
You have been added to Morning Weather Forecast Newsletter

‘I think it makes sense’: Thrifting and resale items qualify for tax-free weekend

DAYTON, Ohio (WDTN) - According to America’s Research Group, 16 to 18 percent of Americans will shop at a thrift store during a given year and 12 to 15 percent will visit consignment and resale shops. Tax-free weekend may be a great time to see what they have to offer.

“I think the benefits of coming to a resale shop and it also being tax free is obviously you're getting that tax taken off, and then everything is already really great deals and low prices because we are a resale. So we focus on pricing 70 percent less than retail," said Haley Brendamour, assistant manager at Once Upon a Child in Miamisburg.

According to Graham, he "started having flu-like symptoms Saturday night and went to the doctor [Monday] morning."

DAYTON, Ohio (WDTN) -- The University of Dayton has updated its masking policy after a sudden rise in cases of COVID-19 throughout the state.

Starting August 2, everyone, regardless of vaccination status, will be required to wear facial coverings while in shared indoor spaces on campus. The university has also provided the following update:

Premier Health CEO to retire in 2022

One taken to hospital after multi-vehicle crash in Trotwood

Schumer: Vote on infrastructure bill could come within days

Fauci: More ‘pain and suffering’ ahead as COVID cases rise

Tracking the Tropics: What’s the difference between hurricanes and typhoons?

Flash Flood Watch cancelled for most of Miami Valley Saturday

Tracking the Tropics – from space: How do astronauts help monitor weather from 250 miles above Earth?

Tropical Storm Elsa weakening as it moves inland after Florida landfall, heading toward US east coast

Tracking the Tropics: Tropical Storm Elsa emerges off coast of Cuba, back over water

Video
More As Seen on 2 NEWS

More stories not to miss...

'I think it makes sense': Thrifting and resale items qualify for tax-free weekend

Oklahoma man still in ICU after four months due to COVID-19, needs double lung and heart transplant to survive off ventilator

Are we headed for a four-day workweek? New congress legislation gaining steam