DAYTON, Ohio (WDTN) – The highway is now open on the eastbound side of I-70 after several accidents closed it from mile markers 20 to 24 Thursday after heavy fog blanketed the Miami Valley Thursday morning.

The fog may have contributed to several crashes on I-70 near Arlington Road in Montgomery County. Traffic in the eastbound lanes was at a standstill for some time while crews worked to clear the crash involving a semi-truck and another vehicle. One person was injured.

Storm Team 2 Meteorologist Jamie Jarosik said the fog is expected to last until mid morning. A Dense Fog Advisory is in effect until 9 am.

Once the fog lifts, Jamie said, we can expect a nice day with lower humidity and warm temperatures this afternoon. 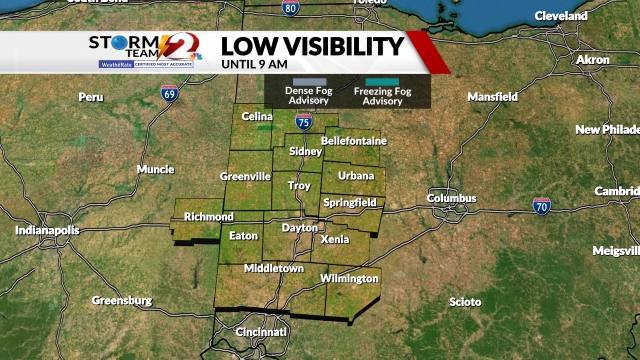 Tonight, clouds will increase as an area of low pressure heads our way. We will see a few showers develop, and periods of showers will move through on Friday. With lots of clouds and rain at times, temperatures will be much cooler.

THURSDAY: Morning fog, then partly sunny and pleasant. High near 80

FRIDAY: Cloudy, breezy and cooler with showers likely and the chance of thunder. High 68

SATURDAY: Mostly cloudy with a few showers through the first half of the day. Breezy and unseasonably cool. High 60

A big cool-down is in the extended forecast over Memorial Day weekend. Highs Friday and Saturday afternoon will only be in the 60s. And Saturday and Sunday mornings, we expect temperatures to be down in the 40s.

Over the last six months, a ferret, a paralyzed hamster in its enclosure and several guinea pigs have been found. Most of these animals were found near the boathouse.

MINNEAPOLIS (AP) — A woman was killed and another person was injured after being struck by a car during a protest in Minneapolis' Uptown neighborhood where a Black man was fatally shot earlier this month during an arrest attempt, police said Monday.

The suspect was pulled from his car by protesters after the 11:39 p.m. Sunday crash and is now in custody and being treated for injuries at a hospital, police said on Twitter. Police did not say how the man was hurt or give the extent of his injuries.

8 hurt after vehicle crashes into crowd at Texas race track

FABENS, Texas (AP) — Eight people were injured Sunday night after a vehicle plowed into a crowd at a mud racing event in Texas.

The El Paso County Sheriff's Department said in a statement that at 6:35 p.m., a vehicle left the mud track and crashed through a guard rail and into spectators.

World Blood Donor Day: How you can donate to help the CBC’s blood shortage

Teen swimmer dies after being struck by lightning in Georgia

Schools across US brace for surge of kindergartners in fall

‘Hero’ still missing after trying to save drowning father, toddler swept out by current in Florida

‘Cave syndrome’: What it is, how to cope with it

World Blood Donor Day: How you can donate to help the CBC's blood shortage

Americans paid off over $100B in credit card debt during the pandemic, but that trend may already be over

Chinese official dies during probe of ultramarathon that left 21 dead

AL man arrested for terroristic threats on businesses, police say his motive was wanting a day off of work

Voila! Just like that, app turns your photo into a cartoon